The A.R.T of a Great Hockey Tryout – Webinar Recap 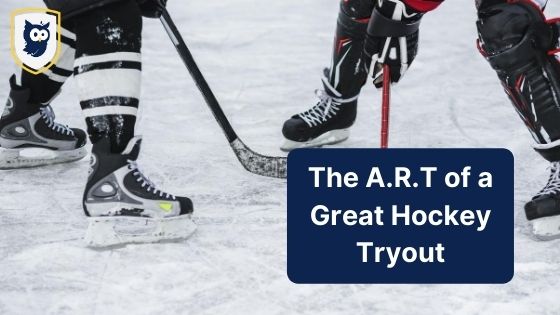 As hockey season nears, your youth hockey association is likely trying to figure out what tryouts and team formation might look like this year during the COVID-19 outbreak. We gathered experts to address concerns your organization may have and share tips their clubs are using to ensure they can safely hold evaluations and form team rosters.

One of our Customer Success Coaches, Ruth Nicholson, was joined by Rolland Cyr, the General Manager at Kitchener Minor Hockey, and Brady Peterson, the Hockey Director at Chisago Lakes Youth Hockey, in a recent webinar to discuss the A.R.T. of a great hockey tryout – Assessing players and logistics; Ranking players; and the Tactics of creating teams – during the coronavirus pandemic.

Assessing Players and Logistics During the Coronavirus Pandemic

The COVID-19 outbreak has presented many challenges for youth hockey associations, including how to hold tryouts so you can safely form teams and start competition.

For Rolland, whose association is in Ontario, Canada, his organization has found success in coping with the outbreak by breaking it into four areas:

Cyr advises clubs to know all the different rules and regulations from the various organizations in your community. This includes your local health department, your local government, and your hockey governing body. It also means understanding your members’ concerns and your facility’s processes.

Because of the various restrictions, Kitchener Minor Hockey has not yet held tryouts. They are holding training sessions until health restrictions are lifted, and evaluations can be conducted safely. His club is using guidelines from the following groups to make their decisions:

Be Prepared in Advance

When holding minor hockey tryouts during the outbreak, Cyr emphasizes it is important to be prepared. This can include moving back tryouts if your club doesn’t have time to implement a safe process. He also suggested only allowing pre-registered athletes to participate in evaluations and having all players pay online. This eliminates having extra people in the building and it removes the need for parents and volunteers to pass payment methods back and forth.

With rules and regulations changing rapidly during the outbreak, clubs need to communicate with parents and players via email, the club’s website, and even videos to explain processes. Cyr also suggested having parents sign a form at registration acknowledging they have read — and will follow — all rules.

To adhere to health guidelines, your club may need to limit the number of players allowed in each tryout session. Cyr also suggested hockey running drills that allow for social distancing on the ice, if needed.

While your minor hockey association likely has a ranking process in place it uses during evaluations, your system might need to be tweaked this year due to COVID-19.

Cyr suggested that youth hockey associations use video footage of tryouts to help compare players if an organization is limited by social-distancing mandates and other safety regulations. Clubs can use video footage after tryout sessions to compare how athletes performed a specific skill. If that is not possible, he also recommended talking to players’ previous coaches to get more information about their abilities.

However, while Cyr’s organization has strict mandates in place, your club might not be limited as much, depending on how widespread the virus is in your community.

For Peterson, his youth hockey association in Minnesota is still waiting to hear what regulations they will need to follow. So, for now, they are planning to proceed with their regular tryout and ranking process. For his association, their goal each season is to rely on the evaluation scores and statistics in the TeamGenius application to rank players.

After the first day of tryouts, each athlete is evaluated and the top five and bottom five (or more) players are identified, leaving the rest of the kids in the bubble. This allows the evaluators to then focus on the bubble players during the last day of tryouts.

Once the club gets rankings on those athletes, then they can proceed with team formations.

How organizations form hockey teams can vary greatly – especially during the coronavirus pandemic.

For Cyr, the COVID-19 outbreak may cause his organization to create a new team formation process this year. Because they have not yet been able to hold tryouts, his club may have to select teams based on last year’s rosters.

“If you made the team last year, you’ll make the team this year,” Cyr said.

Peterson is expecting to follow the same team formation process his club has used in the past.

Once his club has rankings and statistics for all players, then the coaches and evaluators can discuss players’ scores and determine who makes the team. Peterson said this process used to get heated as some evaluators tried to question others’ scores, but these arguments have lightened since they started using TeamGenius’ hockey player evaluation app. Now there are statistics to back up player rankings.

After Chisago’s tryouts, Peterson utilizes TeamGenius’ hockey player feedback tool to send each player his or her results. He said before, when his club used paper forms, he would spend hours going through players’ scores and comments and talking to parents.

“Now I can hit the switch and it kicks it out to each kid,” Peterson said.

He said this eliminates questions and emails from parents asking why their child didn’t make the team, and it gives him specific numbers and statistics to justify player placements.

Get Ahead of Changes

Whether your organization must adhere to heavy safety restrictions, or it can proceed with tryouts and team formations as normal with minor changes, this year’s evaluations may be different than before. Getting in front of the guidelines and communicating your plans to your club members can help prepare your hockey association for a successful season.

TeamGenius is a hockey tryout mobile app and website to streamline the entire player evaluation process. Our player evaluation software covers everything from player check-in to analyzing results and placing players on hockey teams after tryouts.