Must Use Drills for Your Next Volleyball Tryout 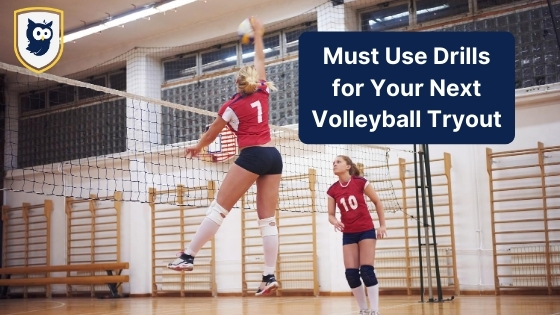 The volunteers are running the check-in tables, the players are stretching on the courts and the evaluators and coaches are taking their places. Everything is ready and tryouts are ready to begin. Now all you have to do is execute your drills and evaluate your youth volleyball athletes.

What drills are you going to run at tryouts? In order to form a successful team, you need to test the right skills to identify the players’ strengths and weaknesses. You need players who can serve, dig, set, and attack the ball.

Take a look at some of the top drills for volleyball tryouts below.

You need strong passers. Accurate passing is necessary to set up offensive plays and is crucial to any team. To test the players’ passing skills TheArtofCoachingVolleyball.com suggests performing a four-on-four passing drill. In this exercise, which was run by the women’s team at Pierce Community College, each team has four players, with all four players front-row eligible. By making all players front-row eligible the points will tally quickly, which will give players more opportunities to serve and pass. The exercise starts with the score tied at 22. To record a point, the serving team needs to win three consecutive points, and the receiving team needs to score four straight points.

TeamSnap.com suggests the Pass and Move drill. To conduct this exercise there needs to be two players at the net, each with a ball, and a line of players in the back row. To start, the first player with the ball closest to the line of players will toss the ball to the first player in line. That player will pass the ball back to the tosser, and then run forward and touch the shoes (or the court near the shoes) of the tosser. The player then runs at an angle to the other end of the court, in front of the second tosser. The second tosser will throw the ball and the player will pass it back. After completing the second pass the player will sprint towards the net, shuffle across the width of the court, then sprint back to the end of the line.

You can’t win a game without having players who at a minimum, can keep the ball into play.

Active.com recommends running a drill that focuses on serving to the zones on the court. According to the website, set up six targets on the opposite side of the court – front right, middle and left, and back left, middle and right — representing the opposing team’s lineup and the six court zones. Ask each player to serve to a specific target and record how accurate and how returnable the serves are.

Another drill option is the Serve ‘N Sprint. Stack.com says that in this exercise, players are divided into two lines at one end of the court. One player from each line serves the ball. If the serve is in-bounds on the opposite side of the net, then the player sprints across the court picks up the ball and gives it to the next person in line. That player can then sit down while the next player serves. If the serve was an error, then the player must keep serving. The first line with all players seated wins and stops the drill.

In serving drills, players should be evaluated on accuracy and form.

Livestrong.com recommends performing a combined setting and hitting drill to test players on their attacking skills. In this exercise, one player is designated as a hitter and one as a setter. The setter sets the hitter in all three positions: strong, weak and middle. First the setter will set the ball to the hitter on the strong side and have them execute an attack. Then they will move to the middle position, and finally the weak position.

Check out these tips for streamlining your next volleyball tryout.

Livestrong.com also suggests focusing an exercise on the players’ approach. Players should line up in a single-file line on the left side of the court, behind the 10-foot line. One at a time, each player should practice the left-right-left footwork, arm swing and hitting movement (without actually hitting a ball). The player should then perform their approach from the center position, and then finally on the right side. This will help break down the fundamentals of their approach and help identify where players need improvement.

Players should be evaluated on the accuracy, the velocity, and their form.

To test a players’ setting skills, Livestrong.com recommends having the players form two lines. Have the players set to each other, moving the ball down the line. This drill can be run continuously for several minutes. It can be turned into a contest to see how many sets in a row the players can record before dropping it. Make sure to restart the drill with the next players in line and not start back at the beginning to ensure each player gets a chance to participate.

GetThePancake.com suggests running a drill called Popcorn. For this exercise, break the players into two groups. Each group starts in a small circle. One player starts with the ball and sets it to the next player. Each player sets the ball to the player next to them until the ball has traveled around the entire circle and each player has set it. Then the group takes one step back and does it again. If the ball drops the team must start back at their original position. Whichever team ends with the largest circle at the end of the designated time limit wins.

In these drills, players should be evaluated on the accuracy, footwork, and technique of their sets.

While drills can showcase players individual skills, what matters most is how they play in games. After running a set of planned drills, tryouts should also include scrimmages at the end of the evaluation sessions. This will show coaches and evaluators how players perform under the pressure of a game situation.

Follow these tips to help ensure that your young athletes are evaluated fairly during the tryout process.