How to Run a Modern Club Volleyball Tryout 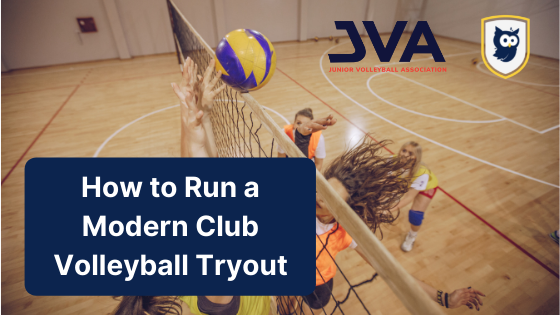 When Northern Virginia Volleyball Association’s President and CEO Rodrigo Gomes first started with the organization, he was shocked at the inefficiencies around the club’s tryouts process.

“I showed up at the facility and I saw a line of kids outside the facility in the winter waiting to come in,” said Gomes, who was the club’s technical director at the time.

Those working the check-in table were trying to take photos of the players and shuffling through paperwork while the athletes were shivering, and parents were getting mad.

“If this is the way this is going to be every year, I can’t do this,” Gomes said, recalling what he thought at the time.

To avoid this from occurring again, he decided to modernize his club’s volleyball tryouts to make them more efficient.

At first, he tried various methods, including using bubble sheets – like the ones used to mark answers for an exam. He thought this would reduce the amount of data entry required during registration. It helped, but it was still a lot of paperwork for his staff to organize.

He eventually decided to go digital and turned to TeamGenius’ player evaluation app.

“It was a simple solution that worked,” Gomes said. “The app didn’t crash. The app kept working throughout the whole tryout process.”

Using the mobile app, NVVA’s evaluators could use objective measurements to score players during tryouts, making the evaluations less subjective. It also helped the volleyball club easily form rosters at the end of tryouts – with more accurate team placements.

“I have happier parents and happier players,” Gomes said. “They feel like they are on the right team.”

For his club, it starts with getting the right information on the registration form. Asking the right questions allows his staff to get players pre-divided into groups that they believe are going to be the best fit for that player. Some questions they ask include the athlete’s position, level of play, gender, age, and other basic information.

When the athlete checks in on the day of evaluations, his or her tryout number is already assigned and is printed on the t-shirt or sticker the athletes receive at the registration table.

They then get their picture through the TeamGenius mobile app so coaches and evaluators can easily identify each athlete. Finally, the player’s height and reach are measured and recorded.

Players then wait for their group number to be called.

Each group follows the same coach throughout the various stations. According to Gomes, this makes the process flow better and eliminates confusion.

After the players are checked in and sorted into groups, the drills begin.

The club sets up a station for each skill and assigns coaches and evaluators to each drill. Evaluators are instructed on what criteria to score the players, based on a predetermined scale and form that is already in the app.

Players are scored based on how well they perform the skill-based on accuracy, speed, or core competency in that skill. If, for example, the drill is to pass the ball, there might be targets set up on the court, Gomes said. The player will be scored on how close they come to the target or other guidelines outlined for that drill.

When the evaluator enters a score into the mobile app, it is immediately visible for Gomes and the coaches to see. The player rankings are also available in real-time, making it easy for the club administrators to see who the top performers are at all times.

Before tryouts begin, he determines how he wants to weigh the scores on each individual skill. This allows him to prioritize certain skills or traits over others when selecting teams.

For example, if he wants to look specifically at setters in the older age groups, he can change the weight of the speed, height, and setting scores to show him the top players at that position.

For the younger age groups, where Gomes says serving and passing are key skills, the club might weigh the scores from those particular drills.

This is all done easily through the app, saving time and effort for the volleyball club.

Before using TeamGenius’ app, team formation used to be a lengthy process for the NVVA administrators. Now it is a fast and easy endeavor.

Because he sets the calculations and weights in the app, he already knows how the players ranked. He even uses a color-coding system in the app to easily show him players’ strengths and weaknesses. There is also a player comparison feature he likes to use, which allows him to compare two players if their scores are close.

Before finalizing teams, Gomes and the coaches consider other information about athletes that might not show up in the evaluations. Gomes gives his coaches the final say in their rosters, but if their recommendation goes against the information in the app, the coach has to be able to back it up to prove the player belongs on the team.

Using TeamGenius and modernizing evaluations has made NVVA’s tryouts more efficient and accurate. It has eliminated long lines at check-ins, frustrated parents, and has improved athlete placement and roster creation.

Watch the JVA Webinar: How to Efficiently Run a Modern Volleyball Tryout

TeamGenius is a club volleyball player evaluation app built for club directors and coaches. Ditch the paper and spreadsheets to easily capture player evaluations, track, analyze, and share results with players all on one digital platform.