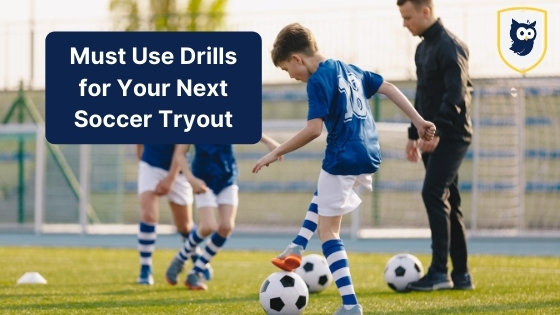 The perfect soccer team. The right mix of athleticism and skills; a group of kids that complement each other on and off the field and carry out the coach’s schemes correctly. That’s the goal of many coaches and directors – to create the ideal soccer squad.

But how does one make that vision a reality? It starts at tryouts. Tryouts are where the process of putting together a team begins; when coaches and directors can take a look at what players are available and evaluate their various levels of talent.

Here are five tips on how to keep bias out of your youth soccer tryouts!

How do leagues know which players will benefit their soccer team the most? It takes the right types of soccer drills to showcase different skills.

USYouthSoccer.org states players need to have a balance of technique, tactics, fitness, and psychology. To ensure players possess these qualities, a variety of drills that target those areas should be performed.

Below are some examples of youth soccer tryout drills your league could do to target the four areas.

Dribbling drills: To test ball control and to get players warmed up, a simple dribble drill can be performed. SoccerDrive.com recommends setting up lines in front of cones and having players dribbling to and from a designated spot. You can ask players to keep their heads up to see how much awareness they have for the ball when they are not looking directly at it.

Passing drills:  Another youth soccer tryout drill SoccerDrive.com recommends is using simple passing drills while increasing the pressure to see if players can make decisions quickly. In the Two Touch Under Pressure drill, players have to get off a pass while being pressured by a defender who is coming at them.

Shooting drills: It’s important to test players’ shooting abilities in different situations. SoccerDrive.com demonstrates a Shooting Box drill, which consists of one player in a box, one player in the goal, and three passers. The player in the box stands with his or her back to the goal and receives a pass from one of the three players. The player then has to turn and shoot using only two touches.

Team defensive drills: JustSoccerDrills.com recommends the drill Snatch to test players’ defensive skills during youth soccer tryouts. In this drill, players are divided into two teams, and each player is assigned a number. The teams pass the ball while moving around a grid. When a player’s number is called, the player must run to the opposite team’s grid and try to steal the ball.

Team offensive drills: Livestrong.com suggests performing the World Cup drill to test offensive skills. In this drill, players are broken into small teams. One ball is kicked into the air and players from various teams try to gain possession of the ball and score on the one goal. Once a team scores, it sits out for the rest of the round. The team that fails to score during the round is eliminated.

Scrimmage: To see how players perform in game-time situations, scrimmages should be included as part of youth soccer tryout drills. Leagues might choose to do a large scrimmage with full teams or break into smaller teams to give players more playing time during evaluations.

Talking to parents about tryout results can be tricky. Here are some communication tips.

Running drills: Running is a required part of soccer, so it’s important to test both the endurance and speed of players. Distance running can be used as part of a warm-up, having players run laps around the field. Because most of soccer requires quick sprints towards the ball or down the field, speed at short distances should also be tested. This can be done during skill drills with a ball, running plays down the field, or timed sprints.

Agility drills: To test the overall fitness and athleticism of players, perform agility drills. These can include jumping drills, footwork drills using the lines of the field or rope ladders, or dribbling the ball down the field or around cones.

The overall stress and pressure of the tryouts session could be enough to test the psyche of each player.

Directors, coaches, and evaluators can note how each player handles their anxiety and if they are able to overcome their nerves to perform at a high level. It can also be noted what motivates a player- whether it’s encouragement, coaching, competitiveness, or something else.

Other ways to test a player’s psyche could be through more complicated drills where players are put in unfamiliar situations or are forced to think through scenarios to make decisions on the field.

TeamGenius is a soccer tryout mobile app and website to streamline the entire player evaluation process. Our player evaluation software covers everything from player check-in to analyzing results and placing players on soccer teams after tryouts.