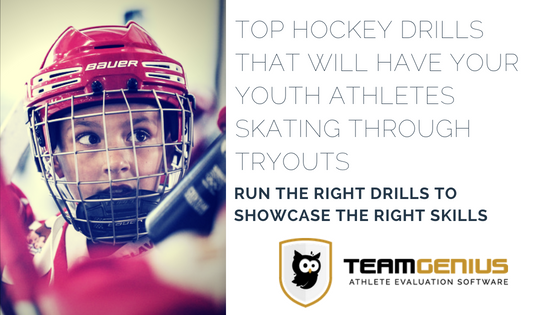 When it comes to forming the right hockey team, you might have the ideal roster worked out in your head. It likely includes players with speed and agility, players who can shoot and score, goaltenders who have lightning-fast reflexes, and relentless defensemen.

How can you find these talented players out of a sea of athletes that tryout? It’s all about running the right drills. You need to test the specific skills you want the athletes on your team to possess, and you also need to see how they play in a game scenario.

There are countless drills that can be conducted at tryouts. It’s up to each league to determine which skills they want to evaluate and how they want to test the players. Below are some examples of drills that you can run during hockey tryout sessions.

How can you find talented players in a sea of athletes at hockey tryouts? It’s all about running the right drills to showcase the right skills. #youthhockey #tryouts [Click to Tweet!]

Tryouts should always include skating drills. Each player on the ice has to be able to skate, even goaltenders. These don’t have to be intense, and can typically serve as a warm-up or one of the first drills of the day.

IceHockeySystems.com recommends the following skating drill to test players’ movement and their ability to stop and start quickly. The website suggests having players skate along the lines of the rink, designating certain areas where they are to skate forwards, backward and side-step. It also suggests including areas where they need to come to a complete stop before resuming the course. This will allow evaluators to test how well players can pick up speed when starting from a complete stop.

Testing a player’s ability to pass and overall puck handling skills are important to highlight during evaluations. One drill that can help test these skills is “3 Pass and Shoot” from Coach Nielsen. In this drill, players form two lines on opposite sides of the rink, and cones are placed in the center of the ice. Two players from one line are instructed to start skating around the cones, about 1 second apart from each other. As they pass the cones, players in the other line pass them the puck. After receiving the pass, the first player switches to skate backward and receives a pass from the other skating player. The first player then skates down the ice with the puck and takes a shot on goal. Coach Nielsen says to then repeat the drill, allowing the other line to skate and the first line to pass to them. Keep repeating the drill until each player has gone through at least once.

According to BestHockeyDrills.com, a good way to test both passing and shooting skills is through a drill that features an uneven rush to the net, setting up a three-on-two or two-on-one situation. The objective is to have the players pass back and forth to see if they can get past the defenders and score a goal. The website says this drill reveals how the players work together as a line and how they react to pressure and unscripted scenarios.

Finding a solid goaltender can be one of the most important additions to a hockey roster. USAHockeyGoaltending.com recommends focussing the goaltender evaluations on how they each perform during scrimmages. This shows evaluators how a goalie will react in real game-time action and how quickly he or she can make decisions. This can be more valuable than seeing how the goaltender performs in more structured drills.

After players are warmed up and have gone through specific drills, the athletes should also be evaluated on how they perform in game-like situations. This can be done through scrimmages. Leagues can run a variety of scrimmages, included one-on-one or two-on-two games. Focusing the scrimmage on a small number of players allows evaluators to see each athlete up close while scoring, and allows coaches and directors to see how players react to game situations and pressure. In one-on-one, it allows evaluators to look at a player’s offensive and defensive skills. The two-on-two drills also give coaches and directors a good look at a player’s offensive and defensive capabilities, in addition to his or her passing skills.

At the end of the tryout session, leagues might opt to play a full scrimmage. This allows coaches and directors to see players in various positions and take a closer look at how each player will perform in a real game. Don’t be surprised if the results of the scrimmage evaluations differ from the player scores during the more structured drills. Holding both scrimmages and drills allows coaches to take a look at how players perform in various situations. It’s up to each league on how they weigh the scrimmage scores versus the drill result.