Tips for Helping Kids Cope With Not Making a Sports Team 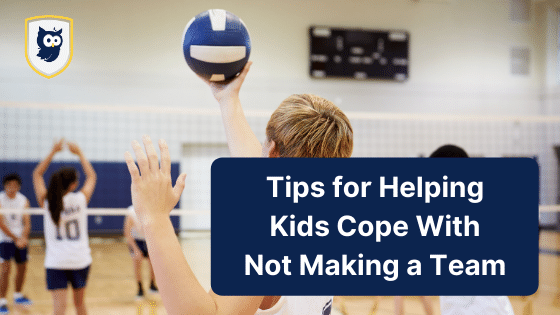 Ask any youth athletics coach what’s the worst day of the season, and you’ll likely get a unanimous answer – cut day.

No matter what the skill level or the age group, cutting an athlete is a difficult task.

Tryouts start out with excited and optimistic kids, anxious to show off their skills and prove they deserve a spot on the team. They often end with disappointment, maybe some tears, and likely upset parents.

While cut-day is a hard day for coaches, the most important part is helping youth athletes cope with the results.

Sports psychologist Dr. Justin Anderson has tips on how to help athletes get through the emotional disappointment of not making a sports team.

Be upfront with athletes from the start of tryouts

Anderson recommends coaches and directors be very clear at the beginning of tryouts that not all kids will make the team. This lets the kids know from the start there is a chance they could be cut.

It also gives coaches and directors an opportunity to let kids know of other opportunities they could pursue – such as another league or another team that is looking for players. This informs athletes that not making this particular team does not have to be the end of their season.

However, Anderson warns that being upfront with athletes can bring on additional stress.

“You don’t want to create more pressure, so it’s a delicate balance,” said Anderson, the founder of Premier Sport Psychology.

Making athletes aware of pending cuts can add to their anxiety and stress levels throughout the evaluation process. Coaches will need to keep the athletes focused on drills to prevent athletes from focusing on their evaluations.

Understand how much making a team means to youth athletes

For youth athletes, especially those between the ages of 12-14, being on a sports team goes deeper than simply playing the game. It can potentially make up who these kids believe they are.

“Coaches ought to know a lot of times these young people, their identities are tied to their sports – they’re a football player or a basketball player,” Anderson said.

It can also be tied to an athlete’s social status, according to Anderson. If the majority of an athlete’s friends are on a team or play a particular sport, that could give him or her the idea that he or she is perceived differently because they play a sport.

Keeping this in mind, it’s important for coaches and directors to not make light of tryouts and cuts, and understand why not making a team can be so devastating for young athletes.

Be authentic when sharing tryouts results

How you communicate tryout results is critical. Because making a team can be so important to youth athletes, coaches and directors should be careful about how they share the evaluation results.

According to Anderson, ideally, coaches and directors should share tryouts results with each athlete one-on-one in person. If meeting with each athlete in person isn’t doable, then the news should be delivered over the phone. Sending results via email or just posting the roster should be avoided if possible.

Meeting or talking with each child individually enables coaches and directors the chance to give each athlete real, constructive feedback.
“Be authentic. Share reasons why (they didn’t make the team),” Anderson said. “Allow it to be a growth opportunity. Give them things to work on.”

Anderson suggests focusing on what the athlete can do, versus what he or she can’t do. Instead of dwelling on them not making this team, use the opportunity to coach them on what to do next. This could include breaking down what skills the athlete needs to work on before next year’s tryouts, other teams or leagues that he or she could join, and any clinics or drills that might benefit him or her.

Arm parents with tips on how to help kids cope

After a coach or director breaks the news of tryouts to athletes, it’s often the parents who feel the brunt of the child’s disappointment and despair.

It’s important for parents to handle the situation in a way that’s best for the child, Anderson recommends. While it’s a hard moment for kids to experience, Anderson says it can be a great lesson in how to deal with adversity.

“The thing I love about sports is it’s a really great microcosm for life,” Anderson said.

He added that it’s important for kids to realize that everyone has setbacks, even pro athletes.

As featured in the recent Gatorade commercial, “The Secret to Victory,” Michael Jordan was cut from his high school varsity basketball team. JJ Watt was a walk-on at the University of Wisconsin. Peyton Manning was 3-13 as a rookie with the Indianapolis Colts. Jordan obviously went on to be arguably the greatest NBA player of all time, Watt is a three-time NFL Defensive Player of the Year, and Manning went on to win two Super Bowls en route to becoming a future Hall of Famer.

Does this mean each youth athlete who gets cut from a team will go on to become an all-star or a pro? No, but it does help parents as they are trying to assist their child in determining their next steps.

But the key, according to Anderson, starts with the parent’s acceptance of the outcome of tryouts. If the parents are upset, then their child will be upset. But if parents can rationally share in their child’s disappointment and then turn it into an opportunity to help them cope with adversity, the child will learn to accept the result and move on in a positive way.