Code of Conduct: Hate it or Love it, You Got to Have It

Whether you want to admit it or not, your youth sports club needs a Code of Conduct.

While we might want to think coaches will always do what’s in the best interest of the club and its players, athletes will be respectful, and parents will be well-behaved, that’s not always the case.

To try to combat these unwanted behaviors, teams need to establish a Code of Conduct. This should include what is expected of coaches, players and parents. While there is still no guarantee every person will follow the Code of Conduct at all times, it at least puts parameters in place for the team to fall back on if disciplinary actions need to be taken. Without documented behavioral expectations, teams could struggle to later remove a coach, player or parent from a game — or even a roster.

A thorough Code of Conduct should include specific sections for each group, detailing what behaviors and attitudes are acceptable. Your team’s Code of Conduct should be distributed to all coaches, players and parents prior to the start of the season. All individuals should sign the form to ensure they have read it and are aware of what is expected of them. This is letting all individuals know in advance of the season what actions will not be tolerated.

When creating your Code of Conduct, make sure to include aspects that follow your team’s mission and values, and encompass how you want individuals to behave when they are representing your club. Error on the side of including more than you think you need to state, and don’t assume individuals will “just know” what behaviors are acceptable. If it’s not in writing you could have a more difficult time taking action later.

Need help getting started? Use the content below for ideas on what your organization might want to include in its Code of Conduct for coaches, players and parents.

There are no guarantees that a Code of Conduct will be followed, but without documented behavioral expectations, teams could struggle to later remove a coach, player or parent from a game — or even a roster. [Click to Tweet!]

Player evaluations made easy! TeamGenius player evaluation software streamlines tryouts, coaches’ evaluations and camps – so you can save time, form better teams, and share feedback with players and parents. Sign up for a free trial here! 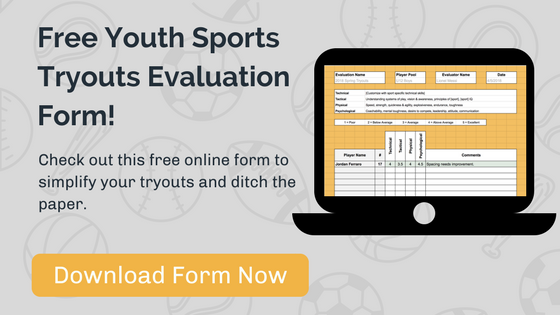