8 Softball Drills to Run at Tryouts This Season 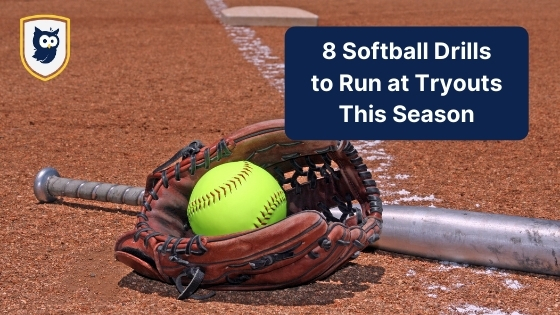 This year more than ever your youth softball club might be looking forward to holding tryouts. After the coronavirus outbreak caused spring sports delays and cancellations, holding evaluations can be a welcomed sign that your organization is returning to normalcy and your season can get underway.

To create rosters effectively and quickly, it’s important to run the right kinds of drills to test athletes’ skills. Take a look at some drills you might want to consider running during your club’s softball tryouts – whether you are conducting them in-person or over video submissions from players.

It’s important to have players warm-up before starting evaluations. This can include a short jog and stretch. While these exercises help loosen players’ muscles and help prevent injuries, they also help eliminate some anxiety, allowing athletes to be more relaxed while performing drills.

During fielding drills, it’s important to test both infielders’ and outfielders’ skills, and evaluate how well players can catch, field balls, throw and react to specific game-time scenarios while in the field.

If players are trying out via video due to social-distancing guidelines in your area, athletes can perform drills they are able to do at home with a parent or sibling. Clubs can send a list of skills they need to see each player demonstrate, including fielding ground balls, pop flies, and making specific throws.

Have players positioned in the infield and outfield. Coaches can hit ground balls to each player to check their form and accuracy in fielding the ball. Coaches can call out where the ball should be thrown to once fielded to also examine each athlete’s throwing abilities and accuracy.

For this drill, all outfielders should line up in a single-file line. A cone should be placed in front of the line. A coach or volunteer will hit a ground ball away from the player, and she must sprint around the cone and put her body in front of the ball before fielding it. The player will then throw it to a designated catcher. This tests the player’s ability to move to the ball, how well she can field a ground ball, and her arm strength.

In this drill, a coach or volunteer stands at home plate with a catcher. Have a player stand at first base, with another player behind her, and the rest of the players lined up behind third base. A coach or volunteer will hit a hard ground ball to a player at third base. She fields it and throws it to the catcher. The catcher then rolls the ball towards third base – as if a player bunted the ball – and the player on third base charges the ball and throws it to first base. That player follows her throw to first base and gets in line. The player at first base then runs over and joins the back of the line at third base. The backup first baseman takes over at first base, and the drill is run again with two new players. This drill tests players’ footwork, speed and accuracy while fielding.

It’s important to test how players can hit in a controlled batting cage to ensure all athletes receive similar pitches and also evaluate players in situations that are more similar to game-time scenarios.

If athletes are trying out via video, they can record themselves at the batting cages, or have a parent pitch to them in their yard or at a nearby park.

To ensure fairness, all players should face the same amount of pitches with similar speeds and strike zone placements in the batting cage.  This allows coaches to watch players’ swings and techniques in controlled situations.

In this drill, coaches or volunteers pitch to the players. The pitcher stands a few yards away from the batter and delivers a variety of pitches – including some high, low, and in the middle. This lets evaluators watch a player in an uncontrolled environment to see how she reacts to pitches in various spots of the strike zone.

Your club needs solid pitchers to be competitive in your league – that’s why it’s important to watch pitchers carefully during tryouts to evaluate their accuracy.

For pitching drills, have players line up across from a catcher the same distance apart as from the mound to home plate. The pitchers should each deliver the same amount of pitches, as designated by the coaches or evaluators. Coaches can tell the players where to pitch to in the strike zone to test the players’ control and accuracy.

Pitchers should also participate in scrimmages or game-time situations where they are pitching to a batter. This allows the evaluators to see how they pitch to real batters in game situations, as well as test their defensive skills when the ball is hit or runners are on base.

If players are trying out via video, they should pitch to a parent or sibling and demonstrate a specific number of pitches to designated areas of the strike zone.

When evaluating catchers, it’s important to test their catching, fielding, and throwing skills. Below are some drills you can do during in-person tryouts.

If players are trying out at home via video, they should have a parent or sibling pitch to them to showcase their catching skills. They can also set up targets in their yard to show their ability to throw to designated bases.

Throwing from One Knee

Have the catchers kneel 20 feet apart on their right knee (left if they are left-handed). They should throw the ball back and forth a set amount of times, and then move 10 feet apart. They should keep doing this until they are the same distance apart as home plate to second base. This will test the arm strength of the players.

Read more about the throwing from one knee drill >

Blocking Balls in the Dirt

Have catchers either work with a partner or with a coach or volunteer. The partner or coach should throw the ball in multiple directions in the dirt. The catcher must go down on both knees to keep the ball in front of her. Evaluators should watch the catcher’s form in how she blocks the ball if she’s keeping her body facing home plate when blocking the ball, and how she moves to balls that are away from the plate.

Check out this softball drill here>

Catchers should participate in scrimmages or drills that mimic real-game scenarios. This allows catchers to showcase their ability to catch for a pitcher during specific situations and demonstrate their fielding abilities during real action.

After completing the drills, clubs should have players go through a short cool-down to stretch out their muscles and help them relax before leaving tryouts. This also gives the club an opportunity to address the players to discuss the timeline for presenting athletes with their evaluation results, posting rosters and other important information.

TeamGenius is a softball tryout mobile app and website to streamline the entire player evaluation process. Our player evaluation software covers everything from player check-in to analyzing results and placing players on softball teams after tryouts.