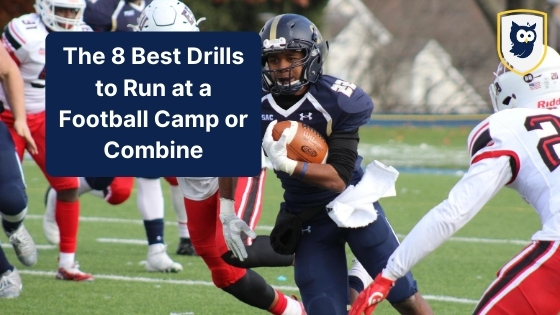 Nothing signals the arrival of fall like the start of the youth football season. This season might be even more anticipated than past years after athletes and club personnel spent several weeks in quarantine in the spring to help prevent the spread of the coronavirus outbreak.

For youth football players, it is important to evaluate their overall athleticism. Coaches can put athletic players into various roles and teach them different positions on offense, defense, and special teams. Running the following agility drills can demonstrate to evaluators how players move.

For this drill, place five cones 5 to 8 yards apart in a zigzag pattern. While carrying a football, have a player start at the first cone and then race to the second cone and cut to the outside cone. He will then round the cone and race to the next cone, then cut around to the outside of the cone. Players should switch the ball so it is always resting on the outside arm. Athletes should be timed during this drill. This exercise will test the agility of running backs, linebackers, defensive backs, and linemen.

No matter what position an athlete plays, it’s important to be fast to beat their opponent to a block or an opening. The most commonly used speed test in football is the 40-yard dash.

Set up cones or markers 40 yards apart and have players sprint the length one at a time. Each player’s time should be recorded.

On both sides of the ball, football players need to have the strength to either move the ball or stop their opponent. While high school and college players might go through weight-lifting tests, younger players can display strength and explosiveness in other ways.

Broad jumps can be performed to test players’ leg strength. Have athletes start by standing, then lowering into a quarter squat and exploding into a jump, leaping forward as far as they can go. The length of each player’s jump should be measured and recorded.

Another test for players’ leg strength is to perform vertical jumps. Have athletes stand next to a wall holding a piece of chalk. They should lower into a quarter squat and then jump as high as they can and make a mark on the wall with their chalk at their highest point.

Have players perform push ups for 1 minute. Evaluators should ensure each athlete lowers himself to a specific target. The total number of push-ups performed to the desired level should be recorded.

You can test players’ passing and receiving skills through the same drill. In this drill, have one athlete be the quarterback and have a player designated as a wide receiver standing next to him. The WR should sprint 10 yards downfield and then turn back and look at the quarterback, who throws the pass and tries to hit the WR as he turns. The receiver should then drop the ball, cut 90 degrees to run across the field, and await a second pass from the QB. The receiver should make this catch on the run. He should then drop the ball and run across the field in the opposite direction to catch a third pass. This drill tests both the QB’s accuracy and the receiver’s ability to run a route and make a catch.

All players on the field must have good blocking skills. To test their abilities, clubs can perform the following drill.

To run this drill, place two bags side-by-side, 2 yards apart. Have two players line up between the bags on all fours with their shoulders touching. Their feet should be beneath them and their butts should be down. The players should try to push or block the other one out of the gap between the bags. This will test players’ leg strength, as well as their drive and competitiveness.

TeamGenius is a football player evaluation mobile app and website that football camps & combines across the country use to evaluate players and share evaluations after the event. Check out an example evaluation report here and if it looks interesting, you can learn more about TeamGenius below.

TeamGenius is a youth sports technology and media company serving thousands of athletes, coaches and volunteers through its player evaluation software, and at-home training app for athletes.