8 Drills for Your Next Youth Lacrosse Tryout 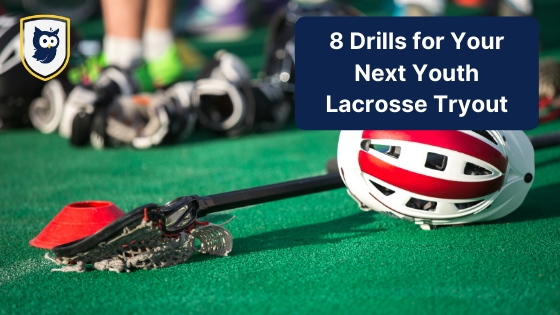 After weeks of sitting at home in quarantine due to the COVID-19 outbreak, your organization and your players are likely excited to get back to some normalcy and conduct tryouts for your youth lacrosse club. While this year’s evaluations might look a bit different — depending on if you’re holding in-person tryouts with social-distancing and other safety measures put in place, or if you’re having players tryout through video submissions – it’s important to test athletes’ skills to ensure you are putting the right players on your roster.

Take a look at drills you might want to run during your youth lacrosse club tryouts.

Whether you’re holding tryouts in-person or via video, it’s important to have all players warm up before going through skill evaluations. Have players run laps around the field – or their yard if they’re trying out via video – and then do basic stretching. This warm-up will help the players prepare mentally and physically for the upcoming drills, and it lets the evaluators look at each athlete’s conditioning and flexibility.

Passing is a fundamental part of lacrosse, so players should perform a variety of drills to showcase their skills. Clubs should test athletes on their abilities to pass and catch both right and left-handed, and also make over-the-shoulder passes and catches.

If a player is completing this drill via video, he or she should try to get family members to participate in the other two positions. Evaluators should focus on the athlete’s skills and movements and not the accuracy of his or her family members.

This drill combines passing and shooting to test players’ accuracy and technique. For this exercise, you need one passing line and one line that will catch the pass and shoot it. To conduct this drill, the shooting player starts jogging towards the net. The passing player makes a pass to the shooter. That player then needs to catch the pass, and once he or she gains control of it, he or she will shoot the ball on the net. You can use a goalie to try to prevent the shooter from scoring to also test the goalie’s skills.

If players are performing this drill at home over video, a parent or sibling can participate and pass to the player when he or she is the shooter. A family member can then run towards the net (or area in their yard designated as the net) and have the athlete pass to them to showcase the player’s passing abilities.

To successfully move the ball around the field, it’s important for athletes to demonstrate ball control skills. You can test athletes’ scooping and catching abilities in the following drills.

For this drill, set up four or five pylons or cones in a zig-zag pattern, spaced about five yards apart. Have a coach or volunteer at each station. The first player moves to the outside of the marker and scoops the ball from the ground while he or she is running. The athlete will then pass it back to the coach at that cone. The player then moves on to the next station, where the coach or person at the second cone will throw the ball towards them to scoop and pass. They proceed throughout the course.

For individual video tryouts, players can set up cones or markers in their yard and have a parent throw them a ball to scoop and pass at each station.

Divide players into equally matched pairs. Have one player carry the ball while the other one tries to get it from him or her. They should switch after the defender takes the ball away or after a certain amount of time. This will test a player’s ability to handle and protect the ball. It will also test the other player’s defensive skills.

If players are conducting this drill at home over video, they should partner with a parent or sibling.

To identify your club’s best offensive weapons, it’s important to run shooting drills to test athletes’ accuracy. In addition to the drills listed below, you should also run exercises with players going one-on-one against a goalie and small scrimmages to see how accurate players are in game situations.

In this shooting drill, form two lines of players on each of the goal lines. Give Line A the ball and have them break upfield. The player with the ball should break a double team from Line B, roll out and pass to a player on Line B, who has mirrored the Line A player’s upfield motion but breaks to the ball when the player from Line A rolls. The player in Line B then shoots on the net. The sides rotate after each shot.

In this drill, clubs should set up three cones about 10 to 15 yards from the net. Place players at each cone and put a goalie in the net if you want to test goalie skills during this drill as well. At each marker, have players scoop up the ball and take a shot. The athlete should rotate to the next station after taking a shot.

If athletes are performing this drill at home, they should designate a net and place markers 10 to 15 yards away. They should take shots from each position.

One of the most important positions on your lacrosse club is the goalie. Because of this, it’s important to run drills aimed at testing these defensive players’ skills. In addition to the drill listed below, organizations can also test goalies’ game-time decisions through scrimmages.

In this drill, clubs should set up three stations about 10 to 15 yards in front of the net placed to the right, left and center. Put athletes at each marker and have them rotate taking shots on the net. This requires goalies to block quick shots coming from different angles.

Goalies who are performing the drill at home over video should have family members take shots on the net from the three different locations.

For clubs who are able to hold in-person tryouts, evaluations should include scrimmages. These games allow clubs to get a better sense of how players perform in game-like scenarios. This can benefit players who don’t perform well at scripted drills but who excel in game situations.

After the drills are completed clubs should have players cool down with stretches. For in-person tryouts, this gives the coaches and director an opportunity to address the players to discuss what comes next, when rosters will be available, and other important information.

Passing is another critical skill to evaluate in players. Consider using this drill when testing athletes’ passing abilities.

TeamGenius is a lacrosse tryout player evaluation mobile app and website to streamline the entire tryout process. Our player evaluation software covers everything from player check-in to analyzing results and placing players on a team after tryouts.