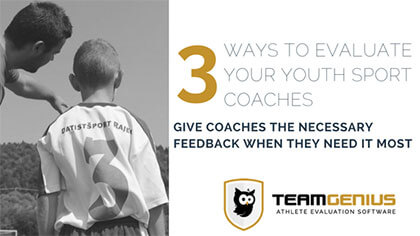 Give coaches the necessary feedback when they need it most. Here are 3 ways to conduct youth sports coach

For youth sports coaches it might feel like they get evaluated on a daily basis. Between feedback from parents, comments from players and shouts from fans, coaches might have a very good idea of what their team and spectators like and dislike about their coaching tactics during games.

Eery good idea of what their team and spectators like and dislike about their coaching tactics during games.

But is that feedback legit? Do the shouts coaches hear from the crowd really reflect how parents and team members feel about a coach’s leadership of a squad?

“Do the shouts coaches hear from the crowd really reflect how parents and team members feel about a coach’s leadership of a squad? Here’s how to make sure coaches get the feedback they need.” [Click to Tweet!]

One way for coaches to get real and constructive feedback on their coaching abilities is through evaluations by parents and players, and formal reviews by their Director of Coaching. These evaluations can give the coach and director the opportunity to address both the positive and negative aspects of the season and what the team needs to improve on for next year.

How often should these evaluations take place? It can vary between leagues, but below are some guidelines on the different types of evaluations and the frequency of each.

Download the coaching evaluation template to make your evaluations easy.

Just like most jobs, coaches should have a pre-determined yearly review. Some leagues may also choose to schedule a mid-year review for its coaches.

These formal performance reviews should be pre-scheduled well in advance to give the coach and the director plenty of time to prepare. Leagues should also make sure coaches are aware of what criteria they will be reviewed against. This could include their wins-losses record, athlete development, relationships with players and parents, how well they upheld the goals and mission of the league, and any other criteria the league feels its coaches should embrace. Knowing these benchmarks will enable the director to gather concrete stats to refer to during the review to back up evaluation scores.

This will also allow the coach to do his or her own preparation to gather information as to how he or she addressed the criteria throughout the season, and even get performance feedback from players and parents throughout the year.

These reviews don’t always have to be focused on the past, either. They can also include discussions about goals for upcoming seasons. According to Andrew Lenhardt, the Director of Coaching at Springfield (Ill.) Area Soccer Association (SASA), during the league’s formal reviews with its coaching staff, they will also often discuss future goals and aspirations for the teams.

While formal reviews should be pre-scheduled with coaches, leagues might also opt to do informal evaluations on youth sports coaches throughout the season. This can also be an option if you decide to evaluate volunteer coaches differently than paid.

Lenhardt says he does random check-ins with the coaches in his league. About two to three times a season he drops in unannounced at practices to see “how the practice is being run, what skills are being worked on, how the players are interacting with the coach,” amongst other things. This helps give him an idea during the season how the coach is doing when working with the team, and how the players are responding to him or her.

Doing informal evaluations throughout the season gives directors the opportunity to identify potential issues with a coach early on so the problem can be addressed and, hopefully, corrected. This also allows the director to identify positive traits he or she is seeing with a coach and encourage him or her to continue those practices throughout the season.

In addition to dropping by practices or games unannounced for impromptu reviews, leagues might also want to consider scheduling a few more structured youth sports coaching evaluations throughout the season. The frequency can vary based on schedules and need, but monthly or quarterly could be a good place to start. These can help prepare youth sports coaches and directors for the more formal annual or semi-annual evaluations.

Leagues might also want to have parents and players review youth sports coaches through evaluation forms. These forms should be formalized by the league and given to each player on the team.

If the league decides to get feedback from players and their families once a year, then the evaluations should be completed at the end – or near the end – of the season. This will give the parents and players an entire season to reflect on.

Some leagues might also decide to have parents and players evaluate coaches around the mid-season mark so they can compare the coach’s results from the middle to the end of the year. Conducting a mid-season evaluation also gives coaches the opportunity to address and correct any negative feedback he or she might get in the reviews.