11 Drills for Your Next Basketball Tryout 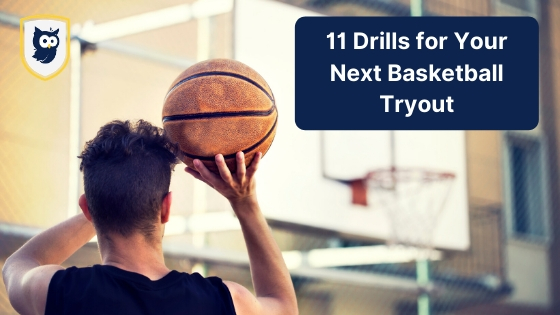 After months of uncertainty due to the coronavirus outbreak, your youth basketball club may be anxious to get back to work and welcome the players back for a new season. The first step may begin with tryouts.

As your organization prepares for player evaluations, consider running these drills to get a complete view of each athletes’ abilities to place them on the right roster.

It’s important for athletes on your team to be able to take care of the ball when dribbling and setting up plays. To test players’ ballhandling skills, run the following drills:

Full Court Dribbling with a Lay-up

For this drill, form two lines of players on opposite sides of the court, near each basket. Place two cones (or chairs) at half-court, one on each side. Have the first player in each line start by dribbling down the court and perform an assigned dribble move at the cone (a cross-over, in and out move, etc). They should then continue to dribble down the court to the basket and finish with a layup. This allows you to test their dribbling skills and their layup abilities at the same time. If the player misses, he or she should get his or her rebound and run to the back of the line. After the first player finishes, the next player in line will go. Both lines should perform the drill simultaneously.

This drill should be performed similarly to the drill above, except with additional cones set up in the frontcourt. Have players weave through the cones with the type of dribble move you assign to them. They should then continue to dribble down the court and finish with a layup or another type of shot.

Passing is another critical skill to evaluate in players. Consider using this drill when testing athletes’ passing abilities.

In this drill, have two players pair up facing each other. They should be about 12-feet apart (the width of the lanes line). Have them throw chest passes to each other as they travel down the court. They should finish with one player making a layup. To start, the players should make six passes down the court. Then they should reduce it to five, then four, then finally three. This will test the players’ arm strength and their ability to catch long passes.

Your club needs to score points to be competitive, making it important to evaluate players’ shooting skills. Consider having players perform the following drills.

To check players’ form, have them shoot at close range from five designated spots in front of the basket. They should shoot at each spot until they make five shots in a row. Then they should move on to the next spot. The goal is to make 25 shots in a row.

In this drill, set up seven orange cones positioned in a semi-circle about 15 feet from the basket. One player starts by taking a shot at one of the cones. They should get their own rebound and dribble back to the nearest cone to take another shot. Run this drill for 1 to 2 minutes. Evaluators should keep track of how many shots each player makes.

To evaluate how athletes perform at the free-throw line, have players shoot 50 free throws, 10 at a time. Record how many each athlete makes.

Defense can be just as important as offense during a game. To test players’ defensive skills, run the following drill.

For this drill, set up cones in a zig-zag formation, about 15-feet apart. When the coach blows the whistle, players take short steps without crossing their legs from the first cone to the second. They should then pivot 180 degrees and slide to the next cone. This is a speed drill, so each player should be timed. If a player crosses his or her feet or falls, he or she must start the drill over.

The best way to test athletes’ offensive and defensive skills is in game-time action. During tryouts, this can be done through various types of scrimmages. You can have players take each other on one-on-one, with small teams during a three-on-three scrimmage, or through a full five-on-five scrimmage. These games can showcase how players react in game-time action, how they move on the court, and how they perform in a competitive situation.

The coronavirus outbreak may limit how you are able to hold tryouts, depending on the situation in your area and what safety parameters your club is following. If COVID-19 prevents your organization from holding in-person evaluations, consider having players tryout via video submissions.

In these situations, you can have players perform the following drills:

Shooting: Designate where in relation to the basket players should shoot from and have them set up markers at a basket at their home or in a park. Have a parent or friend record the player taking each shot. Players can perform the layup and free-throw drills described above. If performing in their driveway, athletes might have to work with a smaller court or alternate attempting layups from the right and left side.

Ball-Handling Skills: To test players’ ball-handling skills, you can have them perform the dribbling drills outlined above, adjusted to fit the size of the court they have available to them. To demonstrate their passing skills, athletes can ask a parent or sibling to partner with them to perform the passing drills. If the athlete cannot find a partner to perform the drill with, instead have the player pass to designated targets. Players can set up markers – such as cones or chairs – and pass to them to showcase their accuracy.

Defense: Players can perform the Defensive Slide drill described above in their driveway or at a park while their parents record them.

Scrimmage: To supplement scrimmage drills, you can request players submit game films from the previous season to show evaluators how they perform in-game situations. Clubs can also ask previous coaches to submit videos or past games if players don’t have footage.

TeamGenius is a basketball tryout player evaluation mobile app and website to streamline the entire tryout process. Our player evaluation software covers everything from player check-in to analyzing results and placing players on a team after tryouts.