How to Measure the ROI of Paperless Evaluations 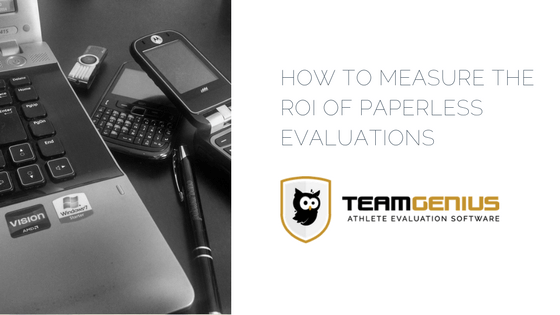 Most of us wish we had more hours in the day to get everything done. Our to-do lists are longer than our grocery lists and work-life balance feels like an unreachable goal that everyone strives for but no one has quite figured out how to achieve. So anything we can do to save time during a season is extremely valuable.

Time savings is one large return on investment when using player evaluation apps and anything that helps save time is a victory. ROI can also be measured by the overall success of the app, an improvement of the evaluation process and overall efficiency.

Take a look below at how three clubs were able to measure a return on investment with the TeamGenius app.

To determine if you’re getting the most out of your investment in an evaluation app you need to do a comparison to how your club was running tryouts before getting the software and how the process was improved after using the app.

Prior to using the

TeamGenius app, the Manhattan Beach Little League organization was using spreadsheets to evaluate baseball players, which quickly became large and complicated. It was difficult to have numerous people access the data at once, and even harder to see where players ranked in real-time.

“We wanted something more modern where data was saved and everyone had access,” said

The app allowed the league to streamline its data, and everyone who had access to it could see the scores in real-time. This helped greatly improve their draft process after the evaluation session.

“To determine if you’re getting the most out of your investment in an evaluation app you need to do a comparison to how your club was running tryouts before getting the software and how the process was improved after using the app.” [Click to Tweet!]

The St. Croix Soccer Club struggled with organization during the tryout process. Player scores were recorded on paper sheets and later tallied and ranked manually.

After switching to the TeamGenius app, the St. Croix Soccer Club was able to give access to the platform to key administrators who could all see player scores and rankings in real-time. By entering the scores into the app, the need for manual calculations – and potential human errors — was eliminated.

Errors aren’t the only thing you should be trying to eliminate from your tryouts. What steps are you taking to make sure your tryouts are fair? Read about our 5 Tips for Removing Bias from Tryouts.

“It saved numerous hours and human error. We caught some mistakes this year we might not have in the past,” said St. Croix coaching director Nathan Klonecki.

The Queen City Volleyball Club used to evaluate players on paper forms that would later need to be collected and calculated. This system was labor-intensive, and it caused issues when players who registered showed up late to tryouts, or didn’t show up at all, as forms needed to be added and removed from evaluator stacks. This process was much easier using the evaluation app.

“The evaluators were able to quickly enter scores for the girls, and could easily see where scores were missing. Better yet, the results were available immediately, without having to collect a bunch of papers and enter the scores into a spreadsheet,” said LeeAnn Taylor of the Queen City Volleyball Club.

The Manhattan Beach Little League was able to save numerous hours on their draft process using the app. Prior to using the TeamGenius software, the league used to spend about five to seven hours performing a draft to form teams. Using the app, where they were able to utilize the real-time scores and ability to have multiple administrators look at the data at the same time, the club was able to reduce the length of the draft process to about two hours.

The St. Croix Soccer Club saw even larger time savings. They estimated the app saved them about 20 to 30 hours of work during the tryout and team formation process.

“During tryouts, the time savings was vital. We weren’t as exhausted,” Klonecki said.

The Queen City Volleyball Club also saved time using the tryout app. “The time savings at check-in and the central collection and compilation of the data were two of the big selling points for TeamGenius,” said Taylor.

After analyzing the overall process improvements and time savings, and any additional wins or cost benefits, clubs can determine their overall ROI of using the app.

The Queen City Volleyball Club was able to establish a positive ROI when they were able to evaluate more athletes in a more efficient manner.

“The number of athletes we evaluated this year was significantly higher than last year,” Taylor said. “(Using less paper) led to time savings both during evaluations and after when we looked at the evaluation results. As a volunteer-run organization, it was important to us to do what we could to make it easier for our volunteers.”

The St. Croix Soccer Club was able to see a ROI on the app as they were able to add the costs of the software into the tryout fees, and the league and players were able to benefit from the efficiencies and offerings of the platform.

“We put the cost (of the app) into tryouts costs, so per player it broke out to a couple of dollars per player,” Klonecki said.

While each club might have a different calculation to determine its ROI on an evaluation app, the software can be beneficial if the league feels it is saving time and adding more tools and efficiencies for the teams and their players.

Are you curious about what else the TeamGenius app can do for your league? Check out our product benefits overview.