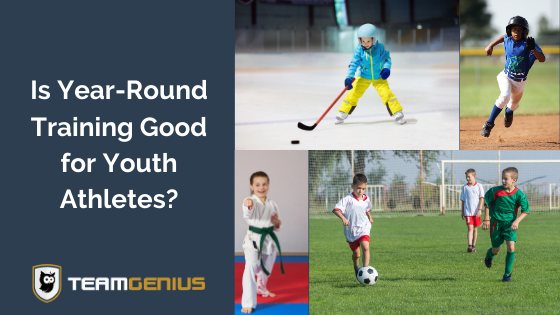 Know the potential risks of having your athletes train year-round

There was a time when athletes were revered for excelling at multiple sports. Bo Jackson starred in both the NFL and MLB, as did Deion Sanders. This past offseason, even two-time NBA MVP Steph Curry dabbled on the golf circuit.

But ask a young athlete how many sports he or she plays, and the answer is more often becoming “one.” Youth athletes are rising through the ranks during a time where specialization is becoming more common. This is when athletes are selecting one sport to focus on — and hopefully excel at — rather than playing multiple sports.

These athletes play their regular baseball, soccer or hockey season, but then they also train for it during the pre-season and postseason. They might do camps all year. Or participate in multiple leagues. Or hire off-season coaches for specific training regimes to prep for the next season.

How did this trend begin? Some experts credit it back to Dr. Anders Ericsson. He believed that to become an expert at a skill you needed to practice it for 10,000 hours. However, when he published his theory, he didn’t necessarily mean sports. According to USYouthSoccer.org, Ericsson’s theory was geared towards games like chess and playing a musical instrument — not athletics.

While practicing athletic skills for 10,000 hours could help an athlete improve at his or her chosen sport, and it can benefit a team if the whole squad is working year-round, there are also risks.

Before a youth athlete should consider specializing in a sport, he or she must have enough maturity in his or her skills in order to benefit from the increased practice. According to the National Strength and Conditioning Association’s website, NSCA.org: “If a child has an immature level of fundamental skill development, they may attempt to play organized sport but the experience may not be as positive as if they were developmentally ready to learn the sport-specific skills.”

Before teams or organizations consider having youth athletes specialize they should ensure the athletes are old enough and developed enough to be able to handle skills.

Interest in the sport:

If you’re going to ask a youth athlete to dedicate extra time to a sport, he or she must have a genuine interest in it. According to NSCA.org, if a child isn’t interested in a sport, he or she won’t be motivated to learn more about it. NSCA.org states, “The more they know about a sport, the more they will remember important points necessary for the performance of motor skills potentially.” If the athlete isn’t interested in the sport, then the extra practices likely won’t benefit the player as he or she will be less interested in remembering and performing the skills.

Risk factors coaches and directors need to be aware of

Because youth athletes have not fully matured physically, practicing year-round and sports specialization presents a potential risk to young athletes. If athletes are practicing the same skills repetitively, they could be at risk for overuse injuries of specific joints, muscles, and tendons. According to the NSCA.org, “The potential for injury increases as the intensity level and training volume increases. This supports the need for adequate recovery for youth sport athletes.”

When practicing year-round at a specific sport, coaches should make sure to practice a variety of skills, avoid repetitive movements and allow for plenty of rest. It’s also important for coaches to track how many hours athletes are practicing.

According to USYouthSoccer.org, Dr. Jay Hertel, the Joe Gieck Professor in Sports Medicine at the University of Virginia, says coaches should track how much athletes are practicing each week and throughout the entire year.

In addition to potential injury, sports specialization can result in mental burnout for youth athletes. Practicing the same sport and the same skills for extended periods of time can result in boredom for athletes. If this happens, they could become disinterested in the sport, and might even want to quit the sport all together.

While specializing in a sport could turn a youth athlete into the next Steph Curry, it’s important that coaches and youth sports directors take precautions to ensure the athletes want to specialize, and that they are practicing in a safe and effective way.

TeamGenius is a youth sports technology and media company serving thousands of athletes, coaches and volunteers through its player evaluation software, and at-home training app for athletes.